Excavating Contemporary Archaeology is an EU funded project that brings together four institutions in four different European countries: Kunsthal Aarhus in Denmark, Mucem in Marseille, POINT in Cyprus, and AIR in Antwerp. The project’s goal is to not only connect the institutions and their countries but to invite Europeans to re-think the meaning of cultural heritage and how we can see, process and maintain it through art.

The project started with an artist residency program, where each institution welcomed artists and has given them access to their location’s unique cultural heritage. The artists also had the opportunity to work with local school children, holding workshops that could take different shapes, depending on the artist, institutions, and the students themselves. At Kunsthal Aarhus the work between the students and the artists led to a vernissage of collages the students made, at Mucem the artist Franesco Tropa has taken the students’ work and created prints that are now on exhibition at Mucem. At AIR, students worked with the meaning of flags and rethought their meaning through playful ways, and at POINT, students got an insight into the National Archives, exploring the culture surrounding a small clay sculpture with Amalie Smith, whose work will be shown at Kunsthal Aarhus in October.

The project started in classrooms and art institutions, but in its next phase it will grow beyond those buildings. A series of books in print and digital form will allow students all over to work themselves on questions of cultural heritage. Though they won’t have an artist with them as the students in the workshops did, they will still be able to see how an artist works with the topic of cultural heritage by flipping their workbook around: The artists are contributing to the books with pictures and texts.

From September on, the work created throughout the project will be on display in different exhibitions at three of the partner’s institutions. First at Mucem with Tropa’s and the students’ work, in October with Amalie Smit in Aarhus, and January in Cypres with a showing of several of the project’s artists, and a final exhibition in the summer of 2020 at KA, where the whole house will be dedicated to showing all artists of the project.

MUCEM (Marseilles, France) is the first national museum dedicated to the great civilisations of the Mediterranean. MUCEM is a multidisciplinary place open to all where anthropology, history, archaeology, art history and contemporary art find common meeting ground. It presents a cultural, social but also scientific exploration of the plurality of the civilisations existing in the Mediterranean world from prehistoric times to the present day. The museum implements education and activities that aim to ensure equal access to culture for all. MUCEM was inaugurated in 2013 but originates from the 19th century.

AIR Antwerpen (Antwerpen, Belgium) is an international residency for artists from all over the world. AIR is centered around the contemporary artistic practice and focuses on individual artistic needs of the emerging visual artist. The organisation guides the artist in a process-based project, with time and space as a premise for a site-specific and contextual practice. AIR encourages intercultural dialogue that arises from its local roots and the cultural, social and political current environment that Belgium offers. AIR was founded in 2005.

Point (Nicosia, Cyprus) is a non-profit organisation involved in the creative support and promotion of various fields of contemporary cultural production. Its international commissions focus on works that involve a relation to Point’s Eastern Mediterranean context. Point hosts a library, and its research department organizes seminars, workshops, lectures, events, educational programmes and the issuing of relevant publications. Point was founded in 2012.

The European Year of Cultural Heritage is organized by the European Commission. The aim of the year is to encourage more people to discover and engage with Europe's cultural heritage, and to reinforce a sense of belonging to a common European space. The slogan of the year is:

Our cultural heritage: where the past meets the future.

The European Commission states that: Cultural heritage has a universal value for us as individuals, communities and societies. It is important to preserve and pass on to future generations. What is more, our heritage has a big role to play in building the future of Europe. That is one reason why we want to reach out to young people in particular during the European Year of Cultural Heritage. 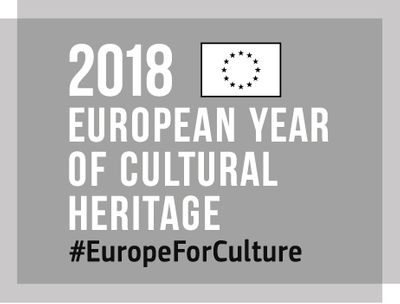